At 46 years old and after losing over 100 pounds, Zoric is in the best shape of his life!

“Jason Hayes is hands down one of the best American Brazilian Jiu-jitsu Black Belts out there today.”

Jay has been one of main training partners since we were both BJJ blue belts together, he has helped me prepare and win/medal at some of the toughest tournaments in the world such as the Pan American Games, Brazilian Nationals, No-Gi Worlds and the Mundials.

Not only is Jay a great training partner, he is an outstanding competitor and Coach as well. He has always been in my corner coaching me at every single tournament no matter how far it was and I know he will do the same for his students. I am proud to say that Jason Hayes and I received our Brazilian Jiu-Jitsu Black Belts side by side, achieving one of our biggest dreams/goals together.

Jay is one of my biggest jiu-jitsu influences and a very close friend to me, so I know he will spread his knowledge of jiu-jitsu to all of his students and lead them on the path of success. Jay’s instruction is second to none, so take full advantage of it!

I’ve been training and exchanging techniques with Jay since 2008. Jay has a rare ability to push you to your limits in training while maintaining a safe and controlled environment. He is also excellent at breaking down techniques and answering questions. If you are living in New Jersey you owe it to yourself to check out Jay’s academy!

“Before I came to train with Jay, I tried out nine different instructors at six different BJJ schools in Manhattan. “

I started out with the ones that are the most well known and moved around based on connections I made at each place.  Each school/instructor had their pros and cons but after a year and a half training with Jay, I feel certain I made the right choice.  Jay is talented, supportive, respectful and fun a combination that is extraordinarily hard to find.  In his school, Jay has created an atmosphere where everyone is welcome so that not only will you find an amazing instructor in Jay but also the best training partners in his students.   No matter what your reasons for starting BJJ, you won’t find anyplace better!

“Not only is Jay a world-class black belt, he teaches like one, too.” 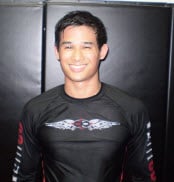 He brings a combination of both excellent technique and competition experience to his classes, and he demonstrates this to his students both physically and mentally. Jay will instruct you on how to be a top-level grappler – whether you decide to compete or not – all the while maintaining a comfortable atmosphere for BJJ practitioners of all levels. Finally, one of the best aspects is that Jay is always pushing himself to learn as well, which means he’s always improving his game and passing that fresh knowledge to his students. If you’re looking for great instruction that prioritizes effectiveness and efficiency of technique in an environment where everyone is made welcome, stop by Jay’s school and get ready for a workout.

I have known and trained with Jay Hayes for over 6 years.  During this time his astounding ability to pick up moves and to learn and absorb techniques has propelled him to an elite level on the grappling competition circuit and a Pan American Gold Medal in Brazilian Jiu Jitsu.  But what really sets Jay apart from other black belts is his unparalleled ability to clearly relate these moves to his students. This is a reflection of his genuine love of the sport and his sincere interest in the success of his students.

Whether distilling the most intricate move to its fundamental parts for advanced students or taking the time to show the finer points of a simple Americana to a new white belt, Jay’s patience and caring attitude is always apparent. With Jay you always train in a friendly, positive and encouraging environment while at the same time being challenged to push beyond your previous limits. It’s an atmosphere that brings the best out in his students. And you won’t just be learning disjoint moves like in some schools.

If you are looking for a school remember, Brazilian Jiu Jitsu is an evolving art; some old school moves that worked yesterday may be ineffective today. That’s why it is such an advantage to have an instructor like Jay who is current on the latest battle tested techniques. The moves Jay shows are ones that he has beaten black belts with in competition.
In short, you can’t do better than choosing Jay as your instructor.

Approximately two years ago I became involved in Brazilian Jiujitsu. At first, I was nervous because I rarely participated in contact sports, however under the instruction of Jay Hayes I was able to develop the necessary skills to hold my own in class (regardless of my smaller stature). Jay’s teaching is unlike any other I’ve experienced, his ability to transfer knowledge to the class and his attention to individual students is unmatched. Whether one is looking to compete or simply experience Brazilian Jiujitsu, Jay Hayes takes pride in each of his student’s progression. I highly recommend Jay Hayes as a teacher.

“In a short year and a half I’ve lost 45 pounds and earned my Blue Belt in Brazilian JiuJitsu.”

Everyone has a path they choose to teake, but you can’t get there without the right direction.  Jay Hayes is nothing short of “The Truth” when it comes to Brazilian JiuJitsu.  If you’re looking to learn the fundamentals and technique that comes with becoming a Brazilian JiuJitsu practitioner, this is where you want to be.
I’ve trained at other schools and because of Jay’s knowledge, patience, and love for the sport, I won’t be leaving NJ United anytime soon.

This Site Secured By: